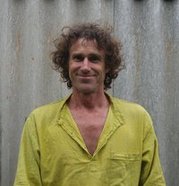 ﻿Hello, I'm called Somonai [aka Dave Cook].  At the beginning of 1984 I began a quest for happiness.  In September that year I had a tremendous breakthrough when after building positive spiritual momentum all year, my mind was taken over by the Divine Spirit and I knew what it was to really be human, to be whole or holy, to be functional as a soul in a mortal body.  However, I did not manage to remain in that exalted consciousness for more than about six months due to the foolishness of allowing doubt to cause my downfall.  I had a project to do, and I feared that I could not do it.  I fell into a deep pain and I lost my functionality.  Since 1985 I have been making the journey back to heaven on urth.

In 1986 I received a body reflexology treatment that activated my awareness of the sore reflex spots on my body.  I began practicing reflexology out of a book by a woman called Mildred Carter.  The book is called "Body Reflexology - Healing At Your Fingertips".  Earlier that year I was introduced to cold-pressed fruit and vegetable juice and fasting with water by a friend.  He had overcome the intracellular disease of Brucellosis while doing a seven day water fast.  He had a book called "The Miracle of Fasting" by Paul Bragg, and another called "Rational Fasting for Physical, mental and Spiritual Rejuvenation" by Arnold Ehret. I caught tropical ulcers that same year and got rid of them by doing a four day water fast.  It is the best way I know for rapidly detoxing and healing from bacterial infections.

1987; into my hands was placed "The Urantia (ur-an-tia) Book".  It was an answer to my prayers for knowledge and understanding of the cosmos and this mysterious life we all have here on this planet.  There are over two thousand pages of condensed celestial information and grand human ideas in the book.  Also someone started calling me "Somonai" and I realised it is my new name that I had prayed for since 1985.  My two best friends passed from this world.  The "Harmonic Convergence" of this planet with the cosmos is said to have taken place by Jose Arguilles and others.  Ken Carey/Raphael had "Starseed Transmissions" published for the first time.

Years passed, things happened as I cleansed, did reflexology and rebuilt my body and mind after my fall.  I began doing massage and more generalised energy healing work with a woman in 1996 at Mullumbimby.  I hitched up with her and had a son with her while doing massage work with her at local markets and as a mobile therapist.  She was a Remedial Massage therapist.  She trained me somewhat, but it was not until I began my tuition with Brian Cavill of Discover Massage Australia in 2005 that I began to feel more like a professional and less like an amateur therapist.  I complete further studies under Brian in 2006 to acquire my certificate in "Deep Tissue and Common Injuries".

I developed burning red sunspots on my skin in 1995 and figured I might be getting some sort of skin cancer, so I bought a book I had seen advertised called "The Cure For All Cancers" by Dr. Hulda Clark.  It made good sense and I spent $25 on ingredients and did the herbal cleanse to get rid of cancer.  It worked.  My new wife developed cervical cancer so she did the cleanse and the cancer went away.  The LASER surgeon said, "I don't know why they have sent you here.  You don't have cancer."  She then told him about the cleanse.

I joined a nutrition MLM company called Neways in 2000 and began taking vitamin and mineral capsules as well as a colloidal drink.  I noticed an improvement in my health and my expected longevity went from 120 as it had been up to 150 years.  After about a year on the Neways supplements a friend showed me a new nutrient drink called "Body Balance".  As soon as I read about what was in it I knew it was superior to what I was on, and it was much less expensive too.  I made the swap to "Body Balance" and began to feel much healthier.  When I tested myself for lifespan potential it had skyrocketed to 250 years.  I realise this sounds absurd to most individuals, but that is what my reading was when I did the kinesiology-type test.  I started to feel like I was superman LOL.  I am still drinking "Body Balance".

Now, with nearly thirty years of experience, I am offering all that I can to assist others on their life journeys.

You want to be healthy enough to never need worry about 'getting sick'.

You want to secure material comfort and not have to work such long hours that you forego home life and family, or maybe just endure the horrible pressure of a job you find yourself in and hating.

You want to learn more about the purpose of human existence.  Maybe you wonder also why happiness is so elusive.  Maybe you want to find an intelligent way of worshiping the Infinite Divine Being often called God.

You want a fully integrated life.  These are things that I work for and have begun to secure.  You have come this far because you are looking for at least something I have here.  Seek and find.

﻿It is a common thing for aspirants of a better life, a new world even, and certainly a new paradigm of attitude, to discover themselves to be not as they were fashioned to be by the world they grew to adulthood in.  There is, upon this discovery, an urge to break free from the attachments that for so long defined their identity in the eyes of their social circle, including themselves.  Such attachments include mode of garb, mode of speech, names, religious tradition, and thinking patterns.
﻿﻿