DETOXING AND PURIFYING BODY AND MIND

﻿﻿Toxicity is commonly thought about these days.  Many understand that modern society is full of toxins that are by humans absorbed on a regular basis in modern day mainstream living.  But few think about getting rid of these toxins or of how to live in a clean way instead of the mainstream way of consumerism and irrational choosing in a consumerist world.


Congestion of the body is rarely thought about.  Most only think about it in terms of a constipation of the large intestine.  Even though cardio-vascular malfunction is the number one cause of death, this remains explained away by the pharmaceutical medical fraternity in terms of stress and cholesterol.  The latter is a scientific fraud for the evidence does not support such a concept.  To see a documentary on the cholesterol myth click the link:
﻿
CHOLESTEROL MYTH
Even when sinuses and nasal passages are thoroughly clogged, this is not thought of as congestion so much as a "cold".  The congestion is not thought of as an excretion problem but rather as the product of some common disease/germ.  Which comes first, the congestion or the "cold"?  We at EzyHealth know that scientific experimentation fully supports the belief that congestion exists before the germ causes added problems.  A fundamental question therefore must be answered: What, then, is congestion and what is it caused by?

Congestion of the large intestine is a faecal constipation. Congestion of the lungs and sinuses, and the other excretory organs, the urinary system and the skin, is a mucal constipation.  Excessive mucus also congests the nervous system, the sinovial fluid system, the vascular system, the entire digestive system, the muscular sytem, tear ducts, and the fluid around cells.  Mucus is produced by mucosa [cells].  It serves as a thick or viscous fluid barrier to toxic compounds in order to protect the cells.  It becomes thicker with time spent in the system.  For example, the thick mucus brew that may accumulate in the lungs and sinuses and be spat out through the mouth and blown out through the nose.  It does not require contact with the air to get gluggy, and thus it may glug up throughout the body and cause some major impedence to the flow of either gases or fluids through these various tubes. Detoxification can hardly proceed when the excretory systems are clogged up with mucus conglomerations. Germs also feed on the organic rubbish trapped in the mucus and thus the mucus glugs terribly .  It is mainly the accumulation of such rubbish that causes problems throughout the body.  When bacteria etc populate such conglomerations, feeding on all the unwanted organic matter caught in the mucus, the problem of density multiplies accordingly.  There are also other complications caused by such an infestation.  Bacteria produce wastes that may be toxic to us.  Inflammation of our tissue is a common problem associated with bacterial and fungal population explosions in our body.  Reduction of mucus is thus a number one priority in restoration of proper function of the body.  The remedy begins where the problem begins and that is at the point of absorption of toxic stuff.  So at EzyHealth we teach about clean living.

Clean living begins with our personal thoughts, words and actions in comparison with the design of the system.  Ultimately, the system of body, mind and soul is the true living temple of the Eternal Spirit, and the wisdom of doing what is dictated by design is divine wisdom.  Full health can only be obtained through correct thought, and from there through genuine heart will alignment.  Merely forcing 'good food' into the body, or forced abstinence from poison, does not get rid of the conflict in the soul. This conflict repercusses throughout the mind and the body in obedience to the will and as an image of the soul.  Spirit is supreme over mind and mind is supreme over body.  Congestion then is a spiritual problem primarily even though it can be managed by forced vigilance over eating and other various habits.    Are you content to merely manage illness?  Have you reached that time of wanting to be fully energised and functional :  In other words, by the realisation of your true potential as a whole or unified person?  What is your goal? 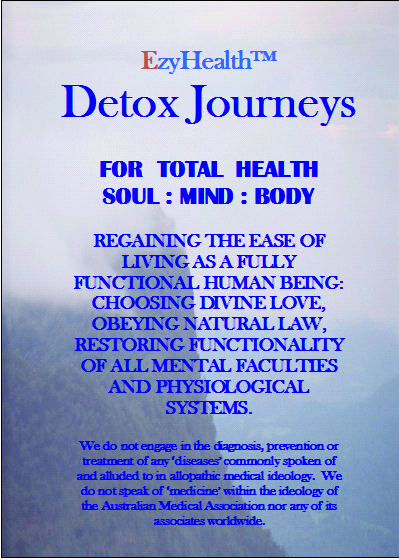 FASTING and the EZYHEALTH DETOX JOURNEY
The practice of fasting is ancient and wholly natural.  The loss of appetite for food occurs when one is emotionally disturbed and also when one is physically disturbed.  We are not the only animals that are governed this way.  Severe emotional disturbance is well known to sometimes result in vomit of the contents of the stomach.  Even the simple rocking of a boat can upset the status quo enough to induce vomit.  Fasting is an exercise in resting.  No food, and water only when dryness of mouth really beckons water.

When digestion of food stops, excretion of wastes begins.  Since night time while asleep is the longest time between meals for most people in modern society, this is when most excretion occurs.  During a fast, the excretion of unwanted matter from the body picks up pace.  At its climax, this process is usually uncomfortable, even painful.  It may include nausea, muscle ache, head ache, foul breath, foul sweat, fever, painful urination, extreme weariness and dizziness.  It passes after about a day usually.  If fever gets too high the fast can be slowed down by eating food.  After passing through the climax, weariness and pain lessens greatly.  Once appetite returns, eating is recommended.  A fast usually requires at least four days to go through this basic cycle.

The EzyHealth Detox Journey is a camping trip to peaceful natural settings for the maximisation of rest combined with removal of the temptations associated with the home refrigerator.


Recommended reading:
A basic outline of the 7+9=16 day Detox Journey in a Power Point presentation available for download: see link below.